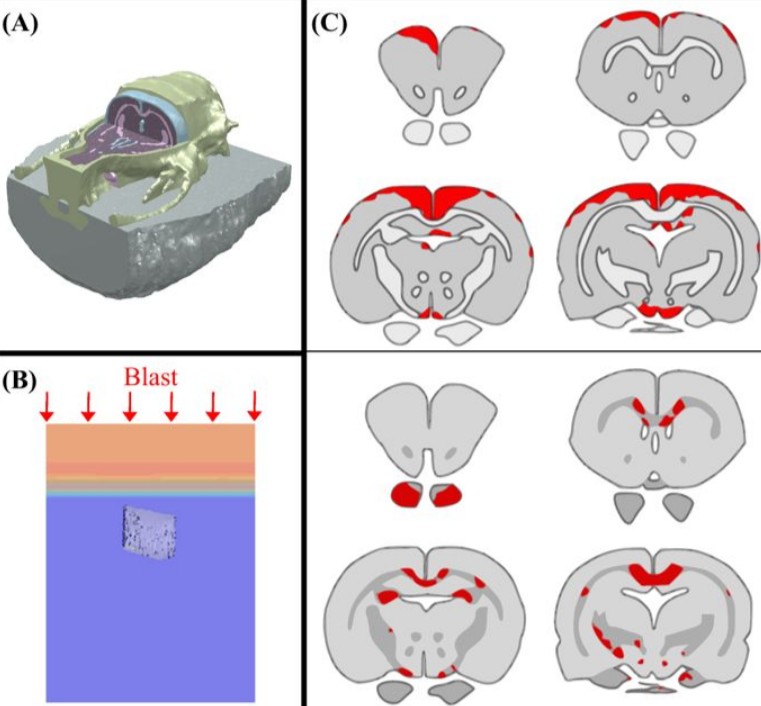 Blast-induced traumatic brain injury has been associated with neurodegenerative and neuropsychiatric disorders. To date, although damage due to oxidative stress appears to be important, the specific mechanistic causes of such disorders remain elusive. Here, to determine the mechanical variables governing the tissue damage eventually cascading into cognitive deficits, we performed a study on the mechanics of rat brain under blast conditions. To this end, experiments were carried out to analyse and correlate post-injury oxidative stress distribution with cognitive deficits on a live rat exposed to blast. A computational model of the rat head was developed from imaging data and validated against in vivo brain displacement measurements. The blast event was reconstructed in silico to provide mechanistic thresholds that best correlate with cognitive damage at the regional neuronal tissue level, irrespectively of the shape or size of the brain tissue types. This approach was leveraged on a human head model where the prediction of cognitive deficits was shown to correlate with literature findings. The mechanistic insights from this work were finally used to propose a novel protective device design roadmap and potential avenues for therapeutic innovations against blast traumatic brain injury.