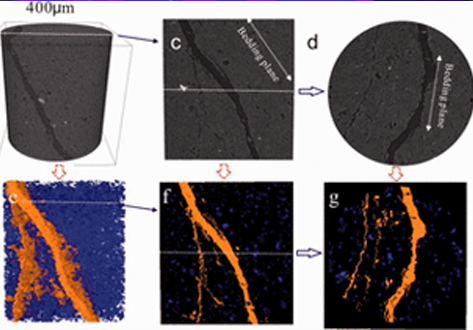 The cracking process in Longmaxi formation shale was experimentally studied during uniaxial compressive loading. Both the evolution of the three-dimensional fracture network and the micromechanics of failure in the layered shale were examined as a function of the inclination angle of the bedding plane. To visualize the cracking process, the test devices presented here used an industrial X-ray CT scanner that enabled scanning during the uniaxial compressive loading. Scanning electron microscopy and environmental scanning electron microscopy imaging techniques were used to observe the microscopic characteristics of fractured surfaces of failed specimens. The combination of these observations clearly illustrated the micromechanics of the failure process in the anisotropic shale. The experimental results suggest that the cracking process could be divided into two stages under uniaxial loading, and the microstructures and bedding planes of the shale played an important role in the cracking process of layered shale. In the first stage of deformation, the cracking mainly occurred as smaller microcracks (such as intergranular, microcracks), and the propagation of the newly formed microcracks was controlled by the bedding plane of the shale specimen. The microscopic imaging study showed that the microscopic damage was mainly dominated by microtensile fractures under uniaxial compression. In the second stage, with the increase in loading, the extensive development and coalescence of the microcracks led to the formation of complex fracture networks. The complexity of the fracture networks was related to the microstructure of the sample. The coalescence of the microcracks could be divided into three levels in the spatial scale, and the coalescence patterns included both tensile and shear patterns.

By using Avizo, 3D fracture networks were reconstructed for four specimens to capture complete images of the fracture network and to reduce artifacts in the vertical cross-sections.

A separated vortex ring underlies the flight of the dandelion