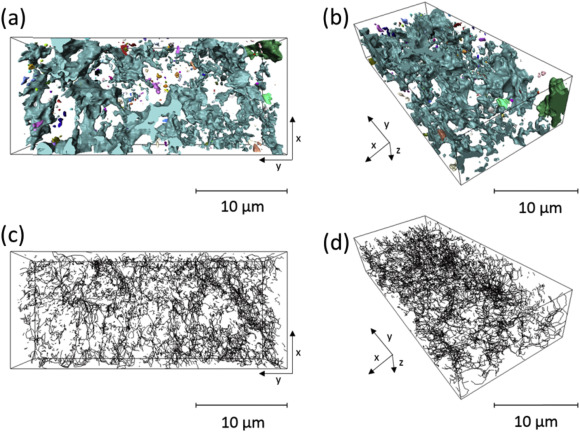 Pyroelectrochemical processing utilizes direct, selective, electrochemical reduction of uranium dioxide, followed by selective electroplating of a uranium metal. Thermodynamic prediction of the electrochemical reduction of UO2 to U in LiCl-KCl eutectic has shown to be a function of the oxide ion activity. The pO2 of the salt may be affected by the microstructure of the UO2 electrode. A uranium dioxide filled “micro-bucket” electrode has been partially electroreduced to uranium metal in molten lithium chloride-potassium chloride eutectic. This partial electroreduction resulted in two distinct microstructures: a dense UO2 and a porous U metal structure were characterised by energy dispersive X-ray spectroscopy. Focused ion beam tomography was performed on five regions of this electrode which revealed an overall porosity ranging from 17.36% at the outer edge to 3.91% towards the centre, commensurate with the expected extent of reaction in each location. The pore connectivity was also seen to reduce from 88.32% to 17.86% in the same regions and the tortuosity through the sample was
modelled along the axis of propagation of the electroreduction, which was seen to increase from a value of 4.42 to a value of infinity (disconnected pores). These microstructural characteristics could impede the transport of O2 ions resulting in a change in the local pO2 which could result in the inability to perform the electroreduction.

Real time, in-situ deuteriding of uranium encapsulated in grout; effects of temperature on the uranium-deuterium reaction