Phylactolaemate bryozoans are the sister-group to all remaining bryozoan taxa. Consequently, their study is essential to reveal and analyze ancestral traits of Phylactolaemata and Bryozoa in general. 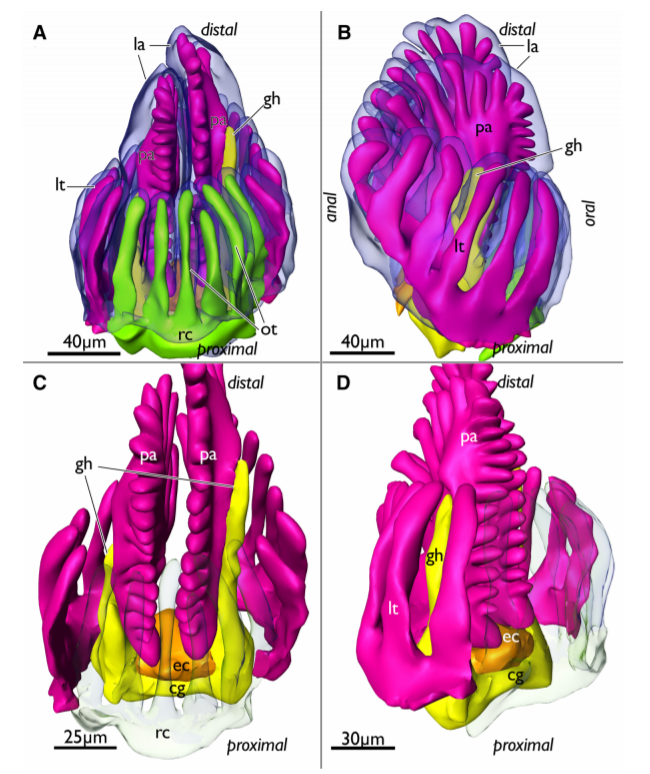 They are the only bryozoans to possess an epistome which traditionally has been regarded as shared with phoronids and brachiopods. Contrary to older observations, an epistome was recently reported to be missing in the early branching phylactolaemate Lophopus crystallinus. In this study, the ontogeny of the lophophoral base and also its three-dimensional structure in adult specimens was reinvestigated to assess whether an epistome is never formed during ontogeny and absent in adult specimens. The results show that organogenesis during the budding process in this species is similar to other, previously investigated, species. The epistome anlage in L. crystallinus forms in early buds from the outer budding layer which penetrates the two shanks of the u-shaped gut. This ingression of the epithelium further proceeds distally and starts to wrap over the forming ganglion. The adult epistome is a rather short, but present bulge above the cerebral ganglion with prominent muscle bundles traversing its cavity. Distally it is arched by the forked canal that in L. crystallinus has a particularly thick and prominent epithelium in the three median tentacles. This study shows that neither during ontogeny nor in the adult stage an epistome is absent. The epistome is less pronounced than in other phylactolaemates, but otherwise similar in its general structure. Consequently, an epistome can be assumed to be present in the ground pattern of Phylactolaemata.