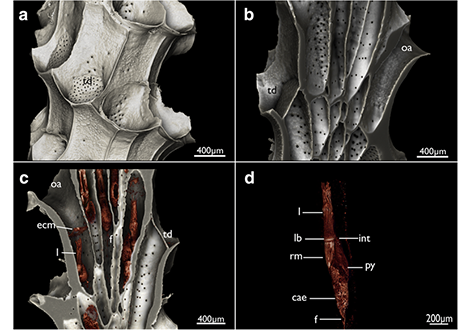 Polypides of C. elegans are located in elongated tubular skeletal cystids. Distally, the orifice leads into a prominent vestibulum which is lined by an epithelium that joins an almost complete perimetrical attachment organ, both containing radially arranged neurite bundles and muscles. Centrally, the prominent atrial sphincter separates the vestibulum from the atrium. The latter is enclosed by the tentacle sheath which contains few longitudinal muscle fibers and two principal neurite bundles. These emerge from the cerebral ganglion, which is located at the lophophoral base. Lateral ganglia are located next to the cerebral ganglion from which the visceral neurite bundles emerge that extend proximally towards the foregut. There are four tentacle neurite bundles that emerge from the ganglia and the circum-oral nerve ring, which encompasses the pharynx. The tentacles possess two striated longitudinal muscles. Short buccal dilatators are situated at the lophophoral base and short muscular sets are present at the abfrontal and frontal side of the tentacle base. The pharynx is myoepithelial and triradiate in cross-section. Oocytes are found inside the pharyngeal myoepithelium. The digestive tract contains dense circular musculature and few longitudinal muscles. The membranous sac contains regular, thin, circular and diagonal muscles and neurites in its epithelial lining.

The general structure of the neuro-muscular system is more reminiscent of the condition found in Gymnolaemata rather than Phylactolaemata, which supports a close relationship between Cyclostomata and Gymnolaemata. Several characters of C. eleganssuch as the lateral ganglia or loss of the cardia are probably apomorphic for this species. For the first time, oocytes that surprisingly develop in the pharyngeal wall are reported for this species.