The purpose of the study is the development and evaluation of the informativeness of the author’s 3D nephrometric score application to predict the probability of intraoperative and postoperative complications in kidney operations. 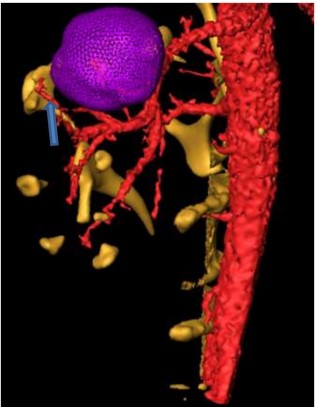 The study includes 264 patients who underwent surgical treatment of renal tumors, before that CT and 3D modeling were carried out. All patients underwent an analysis of the surgical intervention complexity on the C-index, PADUA, R.E.N.A.L., and developed 3D nephrometric score. To determine the set of variables that allow to classify patients, the method of discriminant analysis was used to predict the nature, volume of blood loss, duration of  ischemia, and the number of complications. The sensitivity and specificity of the predictors were estimated with the help of ROC analysis.
Results: Indicators have been established to classify patients according to the probability of complications, the amount of blood loss and the duration of ischemia during surgery for kidney cancer. We have created linear models that predict the development of bleeding during surgery, the volume of blood loss of more than 200ml and the duration of ischemia more than 20min, as well as the likelihood of complications using discriminant functions. The proposed author’s nephrometric score exceeds the capabilities of C-index, PADUA, R.E.N.A.L in many ways in blood loss and time of ischemia predicting, which allows us to recommend it for the assessment of resectability in kidney operations.

To develop a 3D model in Amira, there are five steps:

3D modeling allows, without distortion, to combine all four phases of visualization on one integral image effectively, which provides comprehensive information on the anatomical features of the kidney affected by the tumor process, such as the number of vessels feeding the tumor and their diameter (Figure 1), the distance from the tumor to the renal pelvicalyceal system (PCS) (Figure 2).

Human liver segments: role of cryptic liver lobes and vascular physiology in the development of liver veins and left-right asymmetry