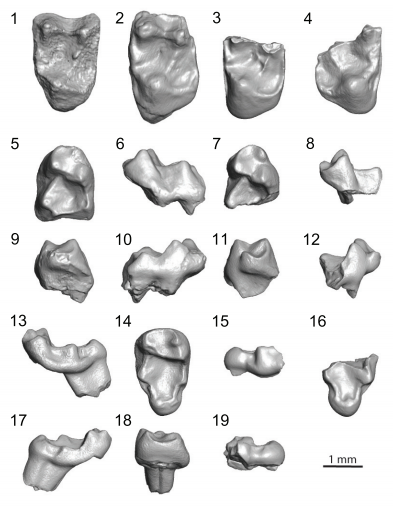 Paromomyidae has been thought to represent the longest-lived group of stem primates (plesiadapiforms), extending from the early Paleocene to late Eocene. We analyzed primate material from the late-middle Eocene of southern California that had initially been ascribed to cf. Phenacolemur shifrae. This material falls at the lowest end of the size range for the family. The Californian specimens also exhibit several dental features that are atypical for paromomyids, such as a strong paraconid on the third lower molar, and differ from early Eocene species of Phenacolemur in lacking a distally expanded distolingual basin on upper molars. (…) We argue that the material from southern California, along with Ph. shifrae and I. mcgrewi, should be transferred to a new genus of trogolemurin omomyoid. Purported European records of paromomyids later than the earliest middle Eocene are reconsidered and found to be non-diagnostic.