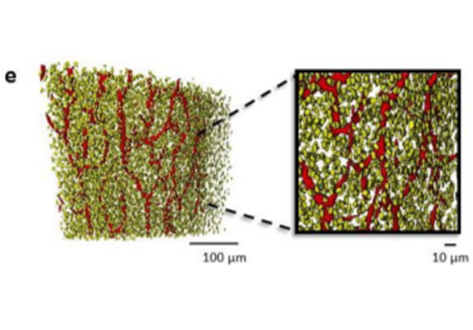 Cortical bone is permeated by a system of pores, occupied by the blood supply and osteocytes. With ageing, bone mass reduction and disruption of the microstructure are associated with reduced vascular supply. Insight into the regulation of the blood supply to the bone could enhance the understanding of bone strength determinants and fracture healing. Using synchrotron radiation-based computed tomography, the distribution of vascular canals and osteocyte lacunae was assessed in murine cortical bone and the influence of age on these parameters was investigated. The tibiofibular junction from 15-week- and 10-month-old female C57BL/6J mice were imaged post-mortem. Vascular canals and three-dimensional spatial relationships between osteocyte lacunae and bone surfaces were computed for both age groups. At 15 weeks, the posterior region of the tibiofibular junction had a higher vascular canal volume density than the anterior, lateral and medial regions. Intracortical vascular networks in anterior and posterior regions were also different, with connectedness in the posterior higher than the anterior at 15 weeks. By 10 months, cortices were thinner, with cortical area fraction and vascular density reduced, but only in the posterior cortex. This provided the first evidence of age-related effects on murine bone porosity due to the location of the intracortical vasculature. Targeting the vasculature to modulate bone porosity could provide an effective way to treat degenerative bone diseases, such as osteoporosis.