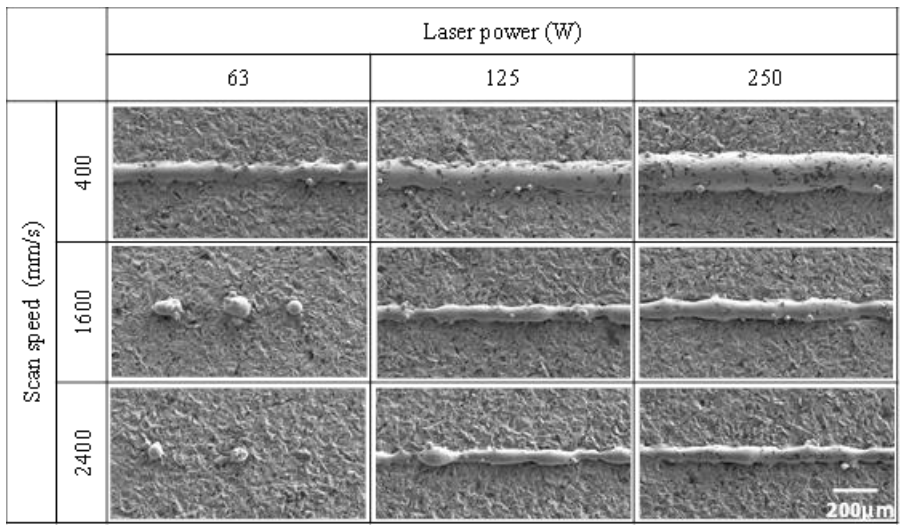 This paper reports our simulations of the metal powder fusion additive manufacturing process based on a two-fluid model. In simulations of metal behavior in which heat is applied by high-density energy sources (e.g., laser or electron beam), the aspects that need to be correctly modeled include boiling and evaporation, as well as melting and solidification. The potential of the two-fluid model to clarify numerous physical phenomena—deep penetration, plume generation, spatter generation due to interfacial pressure differences between gas and liquid phases, and the transport of spatter with high-speed-plume flow—are shown from a perspective that departs from conventional interpretations. This paper compares and discusses the results of simulating the penetration and width of single beads and experimental results.

Analysis of various data from 3D images was carried out mainly by using the AVIZO image analysis software as follows: A threshold value is set for the gray scale of the CT image, binarization is performed, and surface extraction processing is performed to create a polygon mesh on the surface of the sphere. We separate sticking metal spheres in images by the Watershed method (Beucher, 1992) and label them. At this time, particle interlocking information is obtained by judging whether or not the adjacent labels are in contact with each other. Data such as the surface area, sphere equivalent diameter, barycentric coordinates, and so forth can be calculated from the volume of each label. Further, the filling rate can be obtained by calculating the ratio of the volume of the portion of the metal ball occupying the space.

Nuclear waste viewed in a new light; a synchrotron study of uranium encapsulated in grout

Real time, in-situ deuteriding of uranium encapsulated in grout; effects of temperature on the uranium-deuterium reaction