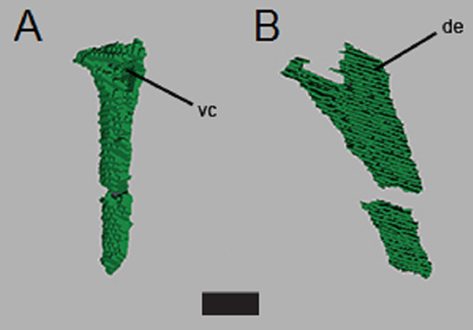 Aetosauria is a clade of heavily armored, quadrupedal omnivorous to herbivorous archosaurs known from the Late Triassic across what was the supercontinent of Pangea. Their abundance in many deposits relative to the paucity of other Triassic herbivores indicates that they were key components of Late Triassic ecosystems. However, their evolutionary relationships remain contentious due, in large part, to their extensive dermal armor, which often obstructs observation of internal skeletal anatomy and limits access to potentially informative characters. In an attempt to address this problem we reanalyzed the holotype of a recently described species of Coahomasuchus,C. chathamensis, from the Sanford sub-basin of North Carolina using computed tomography (CT). CT scans of the holotype specimen clarify preservation of the skeleton, revealing several articulated vertebrae and ribs, an isolated vertebra, left ulna, left scapula, and the right humerus, though none of the material resulted in updated phylogenetic scorings. Reexamination of aetosaur materials from the holotype locality also indicates that several isolated osteoderms and elements of the appendicular skeleton are newly referable. Based on these results, we update the Coahomasuchus chathamensis hypodigm and conduct a revised phylogenetic analysis with improved character scorings for Coahomasuchus and several other aetosaurs. Our study recovers Coahomasuchus in a polytomy with Aetosaurus and the Typothoracinae, in contrast with a recent analysis that recovered Coahomasuchus as a wild-card taxon.