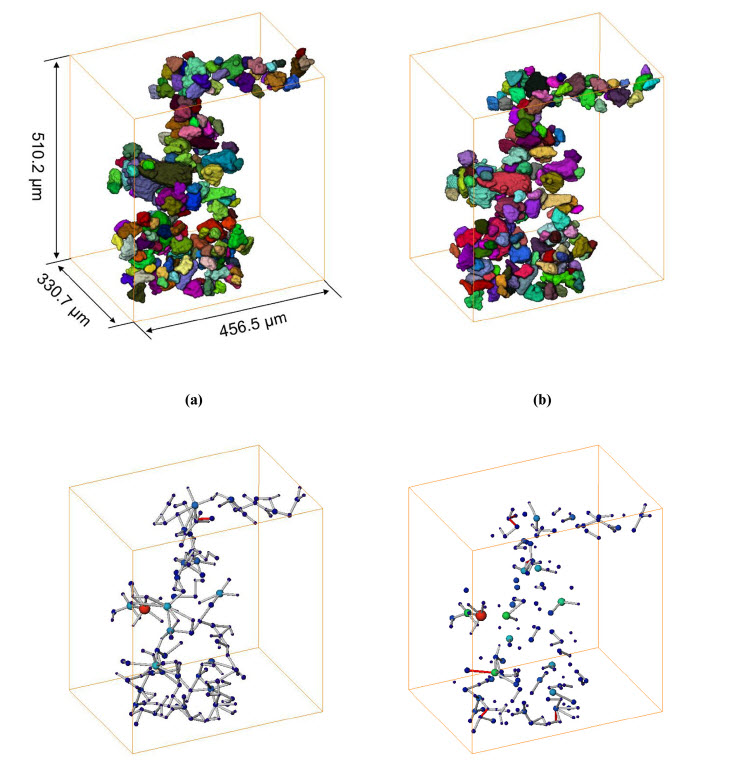 An apparatus is specially designed to perform collapse tests on loess specimens of several millimeters in size and to capture, using X-ray tomography, particle-scale microfabric features of the sample in initial, loaded and flooded (i.e. collapsed) states. (…) Individual particles within the specimen in the initial and deformed configurations are identified and tracked through an iterative segmentation technique and the particle tracking method ‘ID-track’. This allowed determination of particle displacement and rotation. The displacement field within the collapsed sample is found to be less uniform compared to that within the unwetted sample under loading. Coefficient of heterogeneity is defined to quantify the level of non-uniformity of the particle displacements within the deformed sample, revealing higher heterogeneity in the deformation of the collapsed sample compared to that of the unwetted
sample under loading. (…) The influence of porosity on the collapse process is quantified significant heterogeneous volumetric strains are observed at the single particle scale. It is also shown that the evolution of particle-to-particle contacts is much more complex than previously stated.

The images obtained from μ-CT were processed using Avizo, a 3D visualization and analysis software that is equipped with mainstream image processing modules and allows also user-defined operations.

The contact occurrence within the cluster in both configurations is then detected and the branch vectors are obtained using the built-in PNM module in Avizo, which is originally designated to analyze pore connectivity.