Multiphase flow in porous media is strongly influenced by the wettability of the system, which affects the arrangement of the interfaces of different phases residing in the pores. 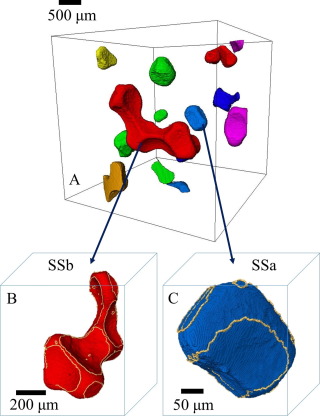 We present a method for estimating the effective contact angle, which quantifies the wettability and controls the local capillary pressure within the complex pore space of natural rock samples, based on the physical constraint of constant curvature of the interface between two fluids. This algorithm is able to extract a large number of measurements from a single rock core, resulting in a characteristic distribution of effective in situ contact angle for the system, that is modelled as a truncated Gaussian probability density distribution. The method is first validated on synthetic images, where the exact angle is known analytically; then the results obtained from measurements within the pore space of rock samples imaged at a resolution of a few microns are compared to direct manual assessment. Finally the method is applied to X-ray micro computed tomography (micro-CT) scans of two Ketton cores after waterflooding, that display water-wet and mixed-wet behaviour. The resulting distribution of in situ contact angles is characterized in terms of a mixture of truncated Gaussian densities.

The tomograms obtained from the X-ray micro-CT scan of the Ketton–brine–decane system with the procedure described in Section 2.1 are post-processed with the Avizo software: the images are filtered and segmented with the techniques mentioned in Section 2.2 and illustrated in Fig. 1. One ganglion of oil is selected from the water-wet dataset and the manual method described in Section 2.3 is used to obtain contact angle estimations in a total of 44 of its three-phase contact points, on grey-scale images. The automatic algorithm is applied on slices of segmented images with the same orientation as those used for the manual method, on the very same points. A comparison between contact angle values obtained through the manual and automated methods is rendered by the scatterplot depicted in Fig. 4. Overall, the agreement between the results obtained with the two methods can be considered as mutually consistent.

Quantification of the degradation of Ni-YSZ anodes upon redox cycling