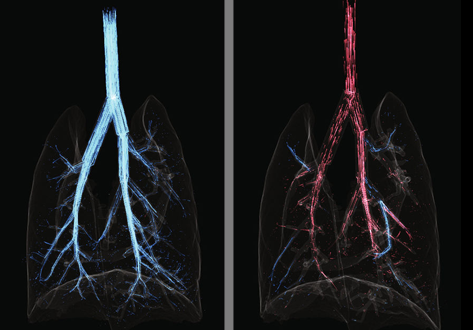 The beating heart is known to produce pressure and airflow oscillations in the lungs of mammals. This phenomenon is often disregarded as detailed measurement of its effects in the lung have hitherto not been possible. Previous studies have attempted to measure the effect of these oscillations on gas mixing. However, the results have proven inconclusive, due to the lack of a direct measurement tool capable of flow measurement throughout the entire bronchial tree. Here we present the first detailed measurement of cardiogenic oscillations, using synchrotron-based dynamic lung imaging of live mechanically ventilated mice. The results demonstrate large flow oscillations and pendelluft in the airways due to the mechanical action of the beating heart. Using a virtual tracer modelling analysis we show that cardiogenic oscillations produced up to 4 times increased gas mixing, but only in the absence of tidal ventilation. The results highlight the importance of considering this often-disregarded phenomenon when investigating lung function, particularly in situations where tidal ventilation is reduced or absent.