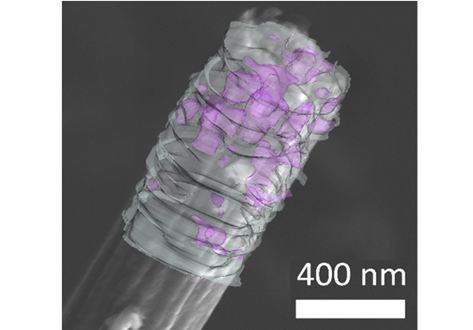 We present an all-fiber flexible supercapacitor with composite nanofiber electrodes made via electrospinning and an electrospun separator. With the addition of manganeseacetylacetonate (MnACAC) to polyacrylonitrile (PAN) as a precursor for the electrospinning process and subsequent heat treatment, the performance of pure PAN supercapacitors was improved from 90 F g−1 to 200 F g−1 (2.5 mV s−1) with possible mass loadings of MnACAC demonstrated as high as 40 wt%. X-ray diffraction measurements showed that after thermal treatment, the MnACAC was converted to MnO, meanwile, the thermal decomposition of MnACAC increased the graphitic degree of the carbonised PAN. Scanning electron microscopy and image processing showed that static electrospinning of pure PAN and PAN-Mn resulted in fiber diameters of 460 nm and 480 nm respectively after carbonisation. Further analysis showed that the fiber orientation exhibited a slight bias which was amplified with the addition of MnACAC. Use of focused ion beam scanning electron microscopy tomography also showed that MnO particles were evenly distributed through the fiber at low MnACAC concentrations, while at a 40 wt% loading the MnO particles were also visible on the surface. Comparison of the electrospun separators showed improved performance relative to a commercial Celgard separator (200 F g−1 vs 141 F g−1).