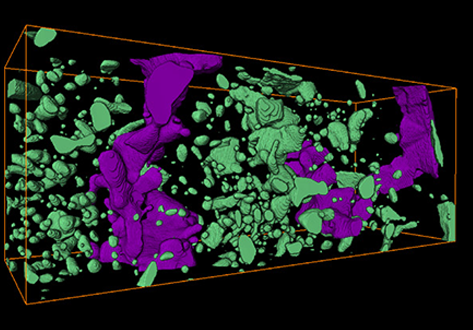 Deformation of the lithosphere by seismic slip along faults dissipates energy to the immediate surroundings as heat and elastic waves. Heat effects may occasionally cause frictional melting along the slip plane, leading to the formation of pseudotachylite, a characteristic fine-grained or glassy fault rock, interpreted as the quenched melt. Recently, it has been suggested that mechanical effects due to rapid loading, such as the formation of shiny “mirror” surfaces or pulverization of rocks without significant shear or “grinding,” are diagnostic of seismic faulting. However, these features have been found only in shallow faults, and in the absence of pseudotachylites, very few criteria can be used to distinguish between unstable slip and slower creep processes along deeper faults. Here, we provide detailed descriptions of mineral microstructures formed in garnet-bearing granulites from the Bergen Arcs, western Norway, during seismic slip at deep crustal levels. Wall rock garnets reveal an intriguing coupling between crystal-plastic deformation and mass transfer during seismic slip.