Osteocytes are the most frequent bone cells connected with each other through cell processes within tiny tubular-shaped canaliculi. The so-called osteocyte lacunar-canalicular network (LCN) plays a crucial role in bone remodeling and mineral homeostasis. Given the critical nature of these functions, it is herein hypothesized that the LCN must be structurally “overengineered” to provide network resilience. 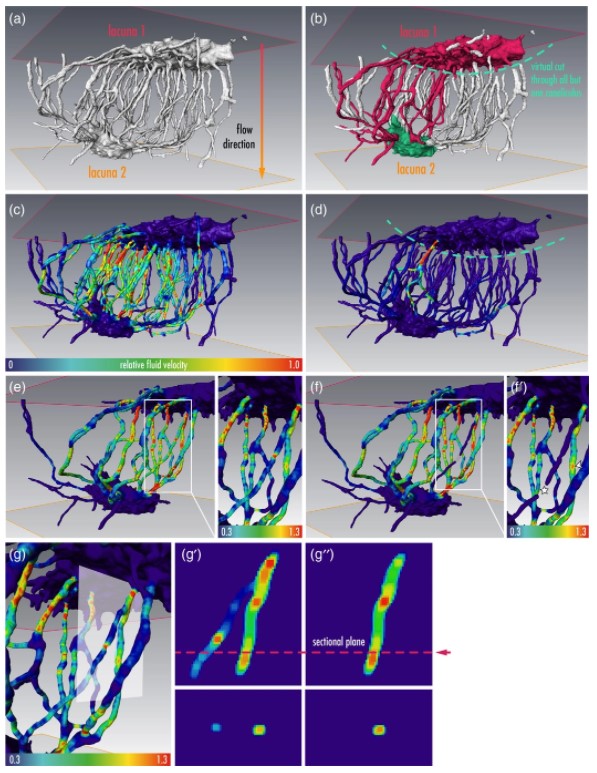 This hypothesis is tested by characterizing canalicular networks in human bone at the fundamental “building-block” level of LCN formed by two adjacent osteocytes. As the hierarchical micro- and macroscale structure of bone is influenced by anatomical location, subjected loads, and growth rate, three distinct tissue types are studied. These include femur, jaw, and heterotopic ossification (HO), a rapidly forming mineralized tissue found in soft tissue compartments following severe trauma. It is found that the LCNs at the fundamental level are composed of hundreds of canalicular segments but of only few separated groups of linked canaliculi (canalicular clusters), resulting in a strongly pronounced interconnectivity. Fluid permeability simulations on intact and artificially altered LCN suggest that the function of the LCN is not only to optimize rapid and efficient access to bone mineral, but also to maintain high permeability when inevitable local interruption of canaliculi occurs.

One segmented dataset per bone type (jaw 1, femur 1, HO 1) was additionally used for fluid analyses in Thermo Scientific Avizo Software (Version 2020.2, Thermo Fischer Scientific Inc., Waltham, MA, USA) using the XLab toolbox. A surface determination was applied on the binary data using the iso value approach. The parallel planes defining the fluid inflow and outflow were chosen within the lacunae. Transport phenomena simulations were performed in the experiment mode, analyzing the stationary field (e.g., velocity) of a laminar flow of an incompressible medium for both directions. The simulations were stopped when the estimation of the convergence criterion at each iteration reached 10−5 or the number of iterations reached 106. To simulate a compromised LCN, the datasets were further manipulated so that all canaliculi except one were virtually cut close to one lacuna. The fluid analyses were then repeated for both flow directions. Absolute permeability is defined as the measure of the ability of a porous material to transmit a single-phase liquid in units of darcy (d), with 1d = 0.987 μm2. Through Darcy’s law the fluid and flow were computed. To numerically estimate the absolute permeability, the Strokes equations are solved. All simulation were performed using the XLab toolbox of Avizo.