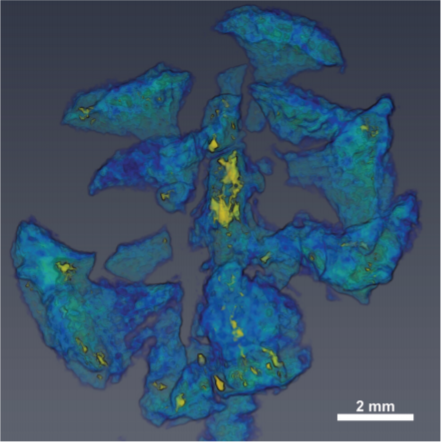 Computed tomography is an increasingly popular technique for the non-destructive study of fossils. Whilst the science of X-ray computed tomography (CT) has greatly matured since its first fossil applications in the early 1980s, the applications and limitations of neutron tomography (NT) remain relatively unexplored in palaeontology. These highest resolution neutron tomographic scans in palaeontology to date were conducted on a specimen of Austrosequoia novae-zeelandiae (Ettingshausen) Mays and Cantrill recovered from mid-Cretaceous (Cenomanian; ~100–94 Ma) strata of the Chatham Islands, eastern Zealandia. Previously, the species has been identified with in situ fossil resin (amber); the new neutron tomographic analyses demonstrated an anomalously high neutron attenuation signal for fossil resin. The resulting data provided a strong contrast between, and distinct three-dimensional representations of the: 1) fossil resin; 2) coalified plant matter; and 3) sedimentary matrix. These data facilitated an anatomical model of endogenous resin bodies within the cone axis and bract-scale complexes. The types and distributions of resin bodies support a close alliance with Sequoia Endlicher (Cupressaceae), a group of conifers whose extant members are only found in the Northern Hemisphere. This study demonstrates the feasibility of NT as a means to differentiate chemically distinct organic compounds within fossils.