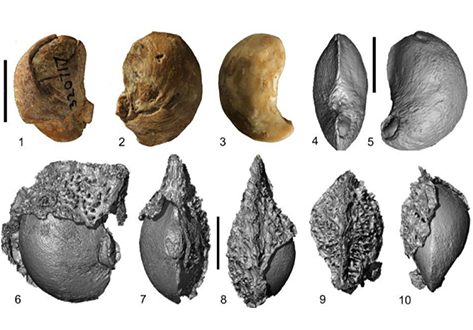 Fossil fruits formerly described as cashews from the Oligocene of Peru are reinvestigated based on the original specimens and newly collected materials. The recovery of an outer spiny layer, preserved in the sedimentary molds surrounding the locule casts, indicates that these disseminules do not represent Anacardium. Imagery from nano-CT scans of the specimens documents a distinctive morphology which does not resemble any fruits or seeds of Anacardiaceae. We describe the morphology in more detail and reassign the fossils to an extinct genus, Pseudoanacardium gen. nov., of uncertain familial affinity. Pseudoanacardium peruvianum (Berry) comb. nov. was a prominent member of the Belén carpoflora, which also included palms plus Annonaceae, Euphorbiaceae, Humiriaceae, Leeaceae, Icacinaceae, Rutaceae and Vitaceae.

Datasets from nano-CT were analyzed with Avizo Software to provide volume renderings, isosurface renderings, and virtual sections in transverse and longitudinal orientations.