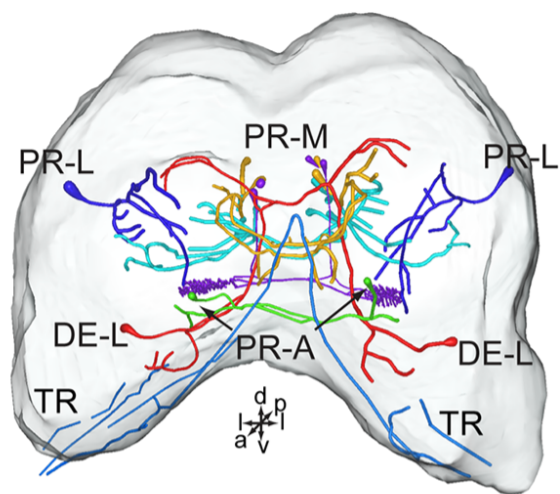 Serotonin (5-hydroxytryptamine, 5-HT) is an important biogenic amine that acts as a neural circuit modulator. It is widespread in the central nervous system of insects. However, little is known about the distribution of serotonin in the nervous system of the cotton bollworm Helicoverpa armigera. In the present study, we performed immunohistochemical experiments with anti-serotonin serum to examine the distribution of serotonin in the central nervous system of H. armigera larvae. We found about 40 serotonin-immunoreactive neurons in the brain and about 20 in the gnathal ganglion. Most of these neurons are wide-field neurons giving rise to processes throughout the neuropils of the brain and the gnathal ganglion. In the central brain, serotonin-immunoreactive processes are present bilaterally in the tritocerebrum, the deutocerebrum, and major regions of the protocerebrum, including the central body (CB), lateral accessory lobes (LALs), clamps, crepine, superior protocerebrum, and lateral protocerebrum. The CB, anterior ventrolateral protocerebrum (AVLP), and posterior optic tubercle (POTU) contain extensive serotonin-immunoreactive process terminals. However, the regions of mushroom bodies, the lateral horn, and protocerebral bridges (PBs) are devoid of serotonin-immunoreactivity. In the gnathal ganglion, the serotonin-immunoreactive processes are also widespread throughout the neuropil, and some process projections extend to the tritocerebrum. Our results provide the first comprehensive description of the serotonergic neuronal network in H. armigera larvae, and they reveal the neural architecture and the distribution of neural substances, allowing us to explore the neural mechanisms of behaviors by using electrophysiological and pharmacological approaches on the target regions.

“The confocal stacks were imported into the visualization
software AMIRA. The Segmentation editor tool was used to label
the neuropils and the Skeleton tree was used to trace the thick
neuron fibers.”