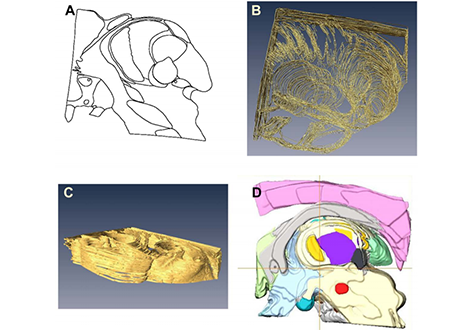 Classification and delineation of the motor-related nuclei in the human thalamus have been the focus of numerous discussions for a long time. Difficulties in finding consensus have for the most part been caused by paucity of direct experimental data on connections of individual nuclear entities. Kultas-Ilinsky et al. (2011, J Comp Neurol, 519:2811-2837) showed that distribution of the isoform 65 of glutamic acid decarboxylase (GAD65), the enzyme that synthesizes inhibitory neurotransmitter gamma-aminobutyric acid, is a reliable marker that allows to delineate connectionally distinct nuclei in the human motor thalamus, namely the territories innervated by nigral, pallidal, and cerebellar afferents. We compared those immunocytochemical staining patterns with underlying cytoarchitecture and used the latter to outline the three afferent territories in a continuous series of sagittal Nissl-stained sections of the human thalamus. The 3D volume reconstructed from the outlines was placed in the Talairach stereotactic coordinate system relative to the intercommissural line and sectioned in three stereotactic planes to produce color-coded nuclear maps. This 3D coordinate-based atlas was co-registered to the Montreal Neurological Institute (MNI-152) space. The current report proposes a simplified nomenclature of the motor-related thalamic nuclei, presents images of selected histological sections and stereotactic maps illustrating topographic relationships of these nuclei as well as their relationship with adjacent somatosensory afferent region. The data are useful in different applications such as functional MRI and diffusion tractography.The three-dimensional dataset is publicly available under an open license and can also be applicable in clinical interventions in the thalamus.