The size and growth patterns of the components of the human embryonic heart have remained largely undefined. 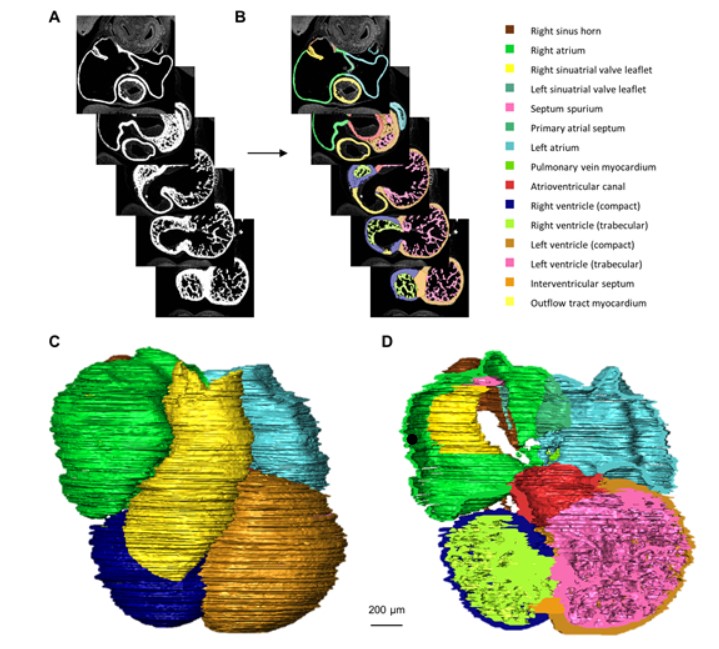 To provide these data, three-dimensional heart models were generated from immunohistochemically stained sections of ten human embryonic hearts ranging from Carnegie stage 10 to 23. Fifty-eight key structures were annotated and volumetrically assessed. Sizes of the septal foramina and atrioventricular canal opening were also measured. The heart grows exponentially throughout embryonic development. There was consistently less left than right atrial myocardium, and less right than left ventricular myocardium. We observed a later onset of trabeculation in the left atrium compared to the right. Morphometry showed that the rightward expansion of the atrioventricular canal starts in week 5. The septal foramina are less than 0.1 mm2 and are, therefore, much smaller than postnatal septal defects. This chronological, graphical atlas of the growth patterns of cardiac components in the human embryo provides quantified references for normal heart development. Thereby, this atlas may support early detection of cardiac malformations in the foetus.

Sections of the heart were immunofluorescently stained for myocardium and aligned in Amira. In Amira, 3D reconstructions can be made of any of the segmented structures, which can be sectioned in any wanted direction. Here, the heart of CS14 (N=1) was segmented for all listed myocardial structures.

The AlignSlices module of Amira software allows for automatic alignment of the sections without deformation correction, while permitting manual adjustments of transformation and rotation. This was done for all hearts.

The 3D models were created using the Generate Surface tool in Amira with the Smoothing option set to None. Hereafter, the Surface (.surf) file was simplified in the Simplification editor to 1,000,000 faces with the options Preserve slice structure, Fast and Create level-of-detail switched on.

The visible skeleton 2.0: phenotyping of cartilage and bone in fixed vertebrate embryos and foetuses based on X-ray microCT