Angiosperm-dominated floras of the Late Cretaceous are essential for understanding the evolutionary, ecological, and geographic radiation of flowering plants. 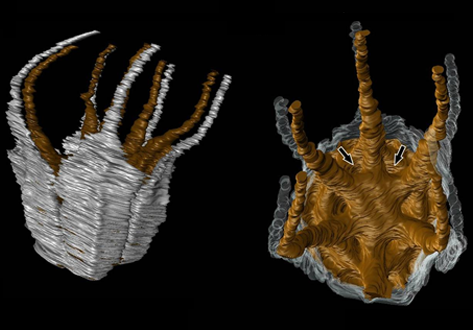 The Late Cretaceous–early Paleogene Deccan Intertrappean Beds of India contain angiosperm-dominated plant fossil assemblages known from multiple localities in central India. Numerous monocots have been documented from these assemblages, providing a window into an important but poorly understood time in their diversification. One component of the Deccan monocot diversity is the genus Viracarpon, known from anatomically preserved infructescences. Viracarpon was first collected over a century ago and has been the subject of numerous studies. However, resolution of its three-dimensional (3D) morphology and anatomy, as well as its taxonomic affinities, has remained elusive. In this study we investigated the morphology and taxonomy of genus Viracarpon, combining traditional paleobotanical techniques and X-ray micro-computed tomography (μCT). Re-examination of type and figured specimens, 3D reconstructions of fruits, and characterization of structures in multiple planes of section using μCT data allowed us to resolve conflicting interpretations of fruit morphology and identify additional characters useful in refining potential taxonomic affinities. Among the four Viracarpon species previously recognized, we consider two to be valid (Viracarpon hexaspermum and Viracarpon elongatum), and the other two to be synonyms of these. Furthermore, we found that permineralized infructescences of Coahuilocarpon phytolaccoides from the late Campanian of Mexico correspond closely in morphology to V. hexaspermum. We argue that Viracarpon and Coahuilocarpon are congeneric and provide the new combination, Viracarpon phytolaccoides (Cevallos-Ferriz, Estrada-Ruiz & Perez-Hernandez) Matsunaga, S.Y. Smith, & Manchester comb. nov. The significant geographic disjunction between these two occurrences indicates that the genus Viracarpon was widespread and may be present in other Late Cretaceous assemblages. Viracarpon exhibits character combinations not present in any extant taxa and its affinities remain unresolved, possibly representing an extinct member of Alismatales. The character mosaic observed in Viracarpon and the broad distribution of the genus provide new data relevant to understanding early monocot evolution and suggest that the (thus far) largely invisible Late Cretaceous monocot diversification was characterized by enigmatic and/or stem taxa.